Like many other Livery Companies, the Fishmongers’ Company has a tradition of maintaining affiliations with the Armed Forces.  Each year the Company awards a Fishmongers’ Medal to candidates from the service affiliations; the award is given for outstanding achievements over time, a single act of high significance, or remarkable individual endeavour.  Today, the Company is proud to be affiliated with:

The Parachute Regiment was formed in WWII. Determined and Courageous, they earned the nickname “Red Devils” from German Paras in North Africa.

Paratroopers are trained to conduct a range of missions, from prevention and pre-emption tasks to complex, high-intensity warfighting.

The Brigade of Gurkhas

The Brigade of Gurkhas, whose soldiers are recruited in Nepal, has served the British Crown since 1815. Since then the Brigade has conducted itself with distinction in numerous conflicts worldwide. The Gurkhas are a unique unit in the British Army with a reputation for being among the finest and most feared soldiers in the world.

Prior to 1997 the Brigade’s focus was in the Far East, but following the handover of Hong Kong it moved its headquarters to the UK.

The British Gurkhas Nepal helped to rescue people and rebuild infrastructure after the devastating earthquake in Nepal in 2016. In 2020, they helped to repatriate over a hundred British tourists stranded in Nepal during the Coronavirus crisis, as well as supporting local communities’ fight against the virus.

The Company has been affiliated with the Brigade since 2014.

Click here to find out more about the Brigade.

The Company is pleased to be associated with the Overseas Patrol Squadron, formerly known as the Fishery Protection Squadron. 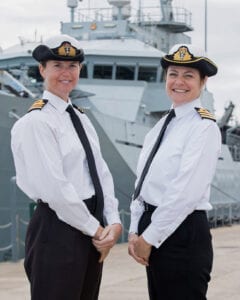 The Overseas Patrol Squadron is the oldest front-line squadron in the Royal Navy. With a small headquarters staff based at Portsmouth Naval Base, the Squadron is made up of four River-class offshore patrol vessels and one helicopter.

The Overseas Patrol Squadron also has a secondary role in conducting inspections of all fishing vessels in UK waters and acting as an arbitrator between rival vessels when disputes arise. Their versatile offshore patrol vessels can also be used in maritime counter-terrorism, counter-drug surveillance, and pollution control.

Click here to find out more about the OPS.

The London Division of the Royal Naval Reserve was established in 1903, with its first training night taking place in Fishmongers’ Hall. HMS President has been formally affiliated with the Company since 1961.

Click here to find out more about HMS President.

RAF Marham is the Company’s newest military affiliation, with the affiliation being established in 2018, the Royal Air Force’s Centenary year.

RAF Marham was first opened in 1916 to defend Norfolk from raids by the German Zeppelin airships during World War One. After being mothballed between the wars, Marham re-opened as the RAF began expanding in 1937. By the time war broke out in 1939, it was home to a fleet of Wellington bombers, which flew on some of the first raids of the war.

RAF Marham is currently the home of the F-35 Lightning a 5th Generation, multi-role, stealth fighter.

The Station is also home to a range of engineering support functions from maintenance to frontline support.

The Company was delighted to fund a double-scull, named Cypselurus (a species of flying fish) for the RAF Marham Rowing Club in 2018.

Click here to find out more about RAF Marham.

Stay up to date with The Fishmongers’ Company newsletter